Winter RIDE - A taste of the Other SIDE 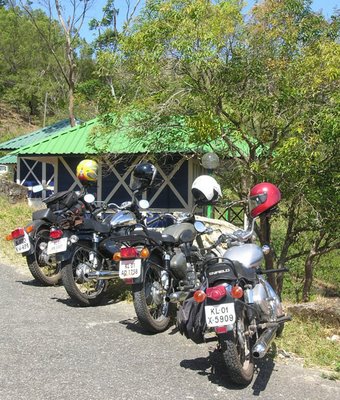 
We have all enjoyed the thrills of biking on the Bullet – Being one with Nature, the accompanying courageous thump, the wind on our faces, the fresh smell of nature and speed to thrill our hearts faster, the skill of riding and negotiating the roads not forgetting the scenic places we cross.

Silver Bullets Winter ride -- A pretty long awaited one after the 2000 km Goa ride in October. And unfortunately it also gave us a taste of the other side of Motor biking – Accidents.

We were supposed to start at 8.00 am on Sunday, 24th December 2006. 8 changed to 9 and then 9.30.am we could start off. We assembled at Kowdiar square. Our pal Ajith also turned up to see us off. Our bikes were all in excellent condition – if anyone were to ask us to go a 1000 km at that instant – the bikes were fit for that. That’s our confidence in the Bullet and the way we take care of that.

We planned to reach Ponmudi, a distance of about 60 km in 90 minutes considering the steep hairpin bends and poor roads. Dr.Gopu was supposed to join us from Palode.

The route we planned to take was -
Kowdiar - Nedumangad - Vithura- Kallar - Ponmudi. (Probably the only way up there!)

Jay led the group, followed by Jayan, BT and Anil. The loud Goldie exhausts of the 3 bikes did make heads turn more. The Christmas Eve traffic didn’t let us speed much above the 60 speeds. The roads were pretty bad after the rains and were narrow and winding too. - We were spending more time in negotiating potholes and oncoming traffic. In the thrill we passed Palode junction and stopped some distance ahead. No sign of Gopu. We stopped for tea at Vithura junction. Gopu called asking us to proceed to Ponmudi, as he would be late. 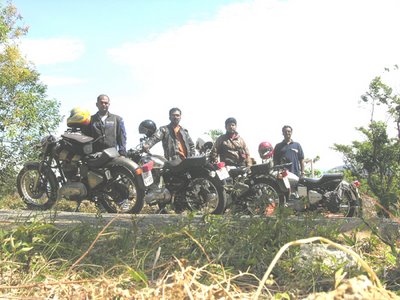 We passed by Kallar up and reached Ponmudi mountaintops. The zigzag roads up the mountains made for interesting riding. The Bulls too had an easy time climbing up the steep mountains. It was mostly 2nd and 3rd gears.

There are about 22 hairpin bends. It was like moving up a refrigerator to the freezer – cooler with every couple of zigzags. The thick clothing and jackets we put did not let us feel the difference, but I had opened my helmet visor to feel the fresh air as I rode up the mountains. Some of the climbs were real steep. One wrong move and it would be a long fall for the motorbike and rider.
I must say all must do a Ponmudi mountain climb on the Bullet. You can learn negotiating sharp curves along with traffic in opposite direction and steep dangerous slopes on one side. No Risk – No Gain.

We were basking in the hilltop sun for sometime and taking a few snaps. That’s when Gopu called us to say that that he was stuck in the 17th hairpin bend. His Bullet 350 standard would not start. It seemed like the piston was stuck. We rode down and joined him. Despite all our attempts, the starter would not budge. We put cold water, some oil and petrol hoping that the piston would budge. We munched on biscuits and mineral water as we tried stunts to get the bike started. Well the Bullet showed real “BULL” behavior by refusing to start. We had no option but to roll it down the mountain. Gopu took it down the mountain while we followed. At the bottom of the mountain we went to the junction. A jeep driver offered to take the bike to Trivandrum city for Rs.700. Steep and we had no choice. So off it went with the front wheel stretching out slightly. The hot sun had made us more tired.

We rode on to Vithura junction and had simple meals. We then headed to Trivandrum – approximately 40 km. We did 60 plus and the curvy roads were empty. As we reached Anad junction, Jay sped away followed by Jayan. Anil approached the junction - a scooter guy crossed the road. Anil turned the bike to the left quickly but had to slam the front due to lack of room. The front wheel got locked and bike fell on its right side and Anil hit the ground.

He had a deep cut on his chin and blood flowed. The scene was gory as any accident scene is. Jay took him to Nedumangad taluk hospital and later to KIMS. If he had a full-face helmet, he could have just dusted himself and rode ahead.

After this incident, Silver Bullets has made Full-face helmets mandatory for group rides.


Gopu saw our bikes later on from the jeep and came across. He rode Anil’s bike back to town. A bent footrest and broken headlight. I rode to KIMS where Anil was waiting for the surgeon to stitch his chin in the emergency. Jayan joined us later with Ajith. He was discharged next day.

Some things on riding I thought I should mention – Chance favors the prepared rider.


1. Always wear protective gear while riding – Full-face helmets, jackets, thick/riding pants, gloves, and shoes.
2. Switch on your headlights while riding in daytime also. You increase your visibility on the road.
3. Take your bike and the road at your pace. - One mans cake could be another mans poison. [Roads will have different traffic at different times. Your pal might have sped away. But when you arrive at that spot probably you have a different traffic situation. ] 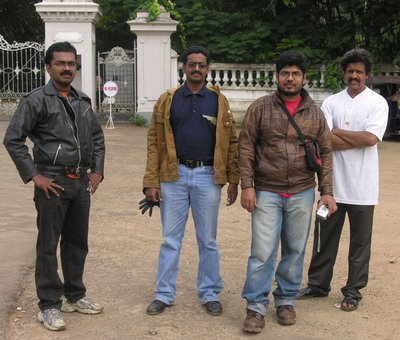 Photos by JSR - For full set http://picasaweb.google.com/jayansr/Ponmudi/
at December 26, 2006 2 comments: Links to this post