Ahaaaa … to be featured in a Girls magazine 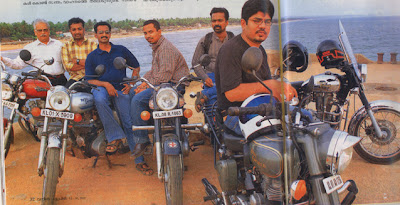 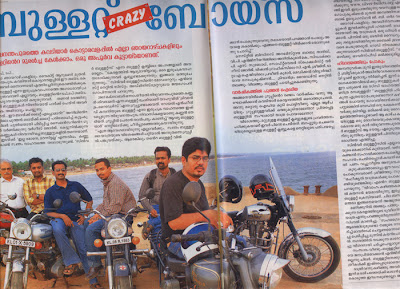 Ahaaaa … to be featured in a Girls magazine (for the right reasons) is probably every male’s dream -- well that’s what has happened! We guys at Silver-bullets have got featured in an article on our passion Royal Enfield Bullet with da Photo! .

Our pics are there too - The photo concept is good –A few guys “standing out” above what seems like the middle of the ocean! We do look like a rock/pop group.
[ L to R - Sharma,Subodh,BT,Gopu,Anil,Jay ]

True, the spirit of the Royal Enfield Bullet is what has got us together and we are in a different league - come Harley or go Harley! Other bikes may only be an addition to our bike stables!

I don’t know to read Malayalam, but from what folks told me it’s a positive article on the group as a road safety Bullet enthusiasts one and the URL given has served as a promotion for the group.

I had a lot of male friends and relatives calling me up and telling me my photos on the magazine. In office I had a couple of girls come up and say -- We saw the snap – great article too! Why didn’t you tell us earlier – Well the truth is frankly I thought those guys would publish only a small byline or write-up only!

But the number of guys who go through Vanitha magazine surprised me. I thought it was a female only -- check the stats and ad below

Well that’s 15 days of stardom kinds till the next issue come out and we fade away! But I shall cherish the moments, as we need to cherish every joyous moment in our life......remembering that the star behind the whole thing is the Royal Enfield Bullet.

Well … this probably goes to show that if you are truly passionate about anything – fruits (rewards and publicity) will follow though we may be content just in riding our Bullets!

May more folks discover the joy in riding and caring about the RE Bullet!