It’s always a great feeling to meet someone you know especially more so when you are really far away from home and your country. This is truer especially if it’s a Bullet lover and from your own Bullet club.

For the unfamiliar, Well Ayush has been in our club prior to it being renamed as SB and he used to ride a black colored jap-crap (its also available in yellow so I guess you know which bike he was riding ;-) . 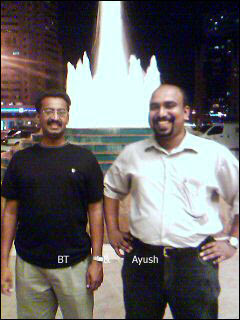 He’s been here in the Middle East(Dubai) since 2004 December, when he gave us a fly-off party at a Vellayambalam – Swiss café. The party was a memorable one…old SBians may recall Jay, Sreejith,Varghese ..and a few others.

It was great catching up with him in Sharjah. Now he really needs a Bullet for his size.
Naturally a Bullet discussion came up and he has agreed to catch the 500cc guy who has an RE in Sharjah. Its very easy also to import an RE here according to Ayush. He said he would find out details. We hope to have more dope on the RE out here.

Another things guys… Im really happy that no one is using the Bullet here to deliver pizza – and no one uses the Harley for that too ( Well we discover some common class in two classic bikes again!)

In the brief meeting we had, we thought as long as we are hanging out here we could help out any Bulleteers riding out here (slim chance probably … but you can never say!), or visiting this side of the globe – and so we launched an SB presence here.

It’s just to share our passion and joy of riding the Bullet. If you are a true Royal Enfield Bullet guy …there’s pals for you in the desert too dude. 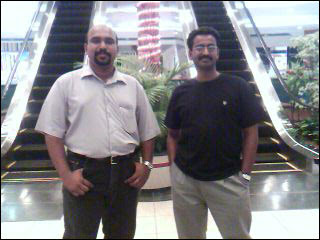