There is normally a great amount of heart (read emotion,affection) involved in choosing to buy a motorbike. I bought my Royal Enfield without riding or test riding a bullet even way back in 2002 despite hearing the usual scepticism and anti-thoughts of the Bullet. I took to it like fish to water. Probably you just know some things are right for you...

Maintaining a bike is painstaking... and not easy as it appears. It does not matter even if you have a couple of servants to clean the bike. The 'U' factor is esential. How to maintain the bike is beyond scope of this article and rather how NOT to maintain is more that matters in this platinum page !

Alternatively imagine the cost for removing the rust and corroded metal and all the yuck! If you dont care about the bike better sell it for what you can get now than selling it as scrap later... U probably can get a few dollars more. "Penny wise, Bike foolish" - BT.copyRiGHT.


2.Don't leave the bike as is- If u are going away for a long time somewhere, sometime. Theres normally a procedure to follow in all bike service manuals so that vital parts stay fit n fine. Like you need to oil and service some parts before packing the bike safely away.Or disconnecting the battery. Even if u got a garage..dont leave it in the open.


3. Animals too luv ur bike... Cats n dogs like to sit on the seats of ur bike - covered or no cover. Beware, along with "sitting" they may do a nasty thing (like read the quote words by adding 'h' as the second alphabet to "sitting" ! Get it ? :)


4.Dont insult ur bike - give respect and u will definitely get respect.That doesnt mean motorbikes will never break down. Normally they won't. But then some electronic parts may not agree with the motorbike's heart all the time :)

Weak and soft hearted readers please exercise caution for below picture set. Strange way to maintain a bike cruelly found in pics sent by one of the readers... I wonder whats the intention of letting this classic Royal Enfield Bullet motorbike rust away. 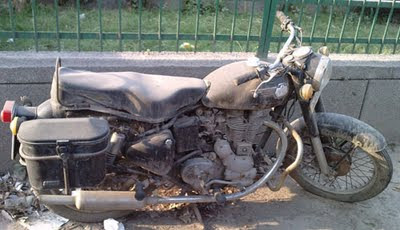 --
.Some one has also covered the petrol cap with a small ice cream cup.
. 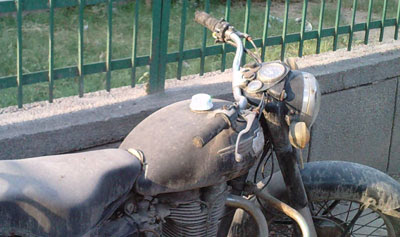 
Im lost for answers and full of wild guesses.On one end I did come across news in north india about some youth stealing Royal Enfield bikes for sheer joy of riding them alone and at the other end these scenes...and there are others who are still saving up to buy an enfield at least a good used one - but what kind of memories can be kept alive by letting a bike "RUST in peace" ? DON'T Do.


Ride on and take care - both u and the bike!
Have a nice weekend! 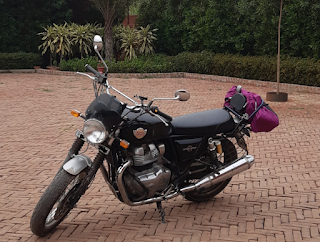